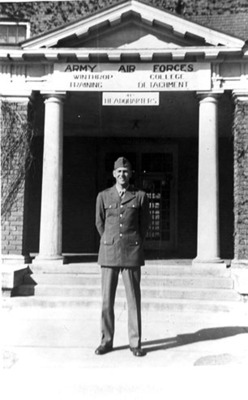 In 1942, the U.S. Army Air Force (formerly known as Army Air Corps, 41st College Training Detachment) and the Civilian Pilot Training Program were based at Winthrop. The cadets received pre-flight and flight school preparation as well as participated in activities on campus.

This photograph is of an Aviation Cadet in front of Bancroft Hall (affectionately referred to as Fort Bancroft) where the male cadets were housed.