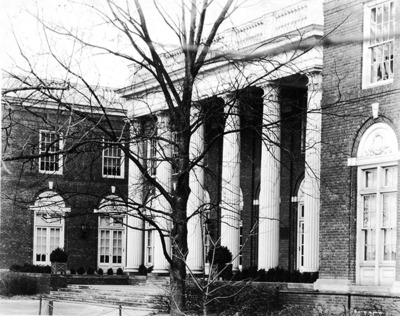 In 1920, construction on Johnson Hall was completed with funds from oil magnate and philanthropist John D. Rockefeller, the YWCA, and the state legislature. The building was named after founder and first president Dr. David Bancroft Johnson. Originally it was built as a student activities building where clubs and organizations would meet such as the YWCA and the many literary societies. Now Johnson hall is the center for performing arts and houses the Johnson Hall proscenium theatre, the Johnson Studio Theatre, several Dance studios, and the Theatre and Dance computer lab.

This photograph is of Johnson Hall shortly after it was constructed in the 1920s.