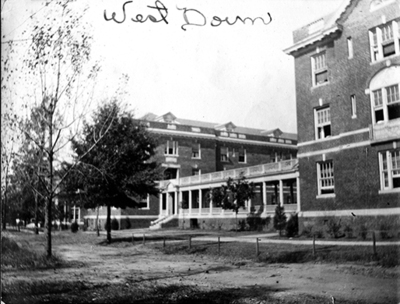 In 1920, construction on Roddey Hall was completed. Connected to Johnson Hall and Rutledge Hall by covered passageways, Roddey Hall was originally a residence hall known as West Hall. Interior space was converted to efficiency apartments In 1975 and renovated in 1989 to house primarily married couples, single parents, graduate and international students. In 1926, the building was named in honor of William Joseph Roddey, Winthrop Board of Trustee member who served from 1893 to 1945. The Rock Hill industrialist played a prominent role in bringing Winthrop to Rock Hill.

This photograph is of West Dorm (Roddey Hall) in 1925.