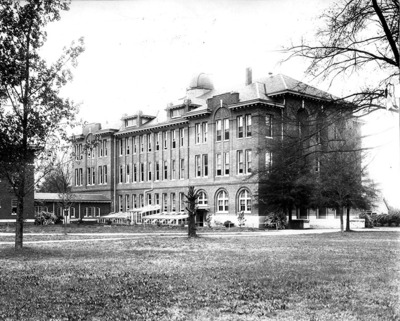 In 1913, construction on the Tillman Science Building was completed. The Science Building fell into disrepair and razed in 1962. It would be replaced by the Sims Science Building which was built in 1961. The Tillman Science Buiulding was located on the lawn area between Bancroft Hall and Kinard Hall. It was named in honor of Benjamin Ryan Tillman's contributions to Winthrop University. Although Tillman was an avowed white supremacist, architect of state Jim Crow laws, and a violent advocate of lynch law, he conversely held progressive views on women's education and championed state support for Winthrop which allowed Winthrop to emerge from an uncertain future in the 1890s and early 1900s.

This photograph is of Tillman Science Building from the early 1920s.