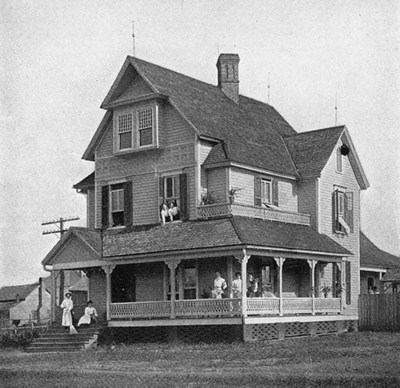 In 1909, Winthrop's Home Management Program was started to teach students how to take care of the home. This home was located near where Joynes Hall is situated and served as the Home management House until 1912 when the Stewart House became the practice home. The practice home had been housed since 1901 in a Victorian cottage, sold with its 2 acre lot to the college by W. J. Cherry, a Winthrop Trustee, for $2,400. The Cherry House was moved from near the Tillman Science Building where it stood until 1939 when Byrnes Auditorium was built. The house was originally moved to where Phelps Hall stands and was moved to Park Avenue Extension where it stood facing Park, on what would be the end lot from York Avenue once plans were laid to build Phelps Hall in 1943. The Cherry House stood at Park Avenue Extension and served as a home to a series of Winthrop Faculty until it was demolished around 1961.

This image is of the Practice Home from the 1909 Winthrop Yearbook (Tatler).