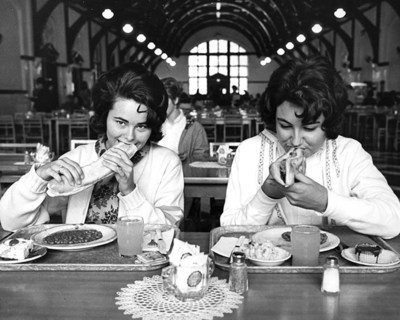 In 1909, construction on the Winthrop Dining Hall was completed. It was built to replace Winthrop’s first dining hall which was in the back basement of the Main (Tillman) Building, which had a low ceiling, poor ventilation, and inadequate lighting. Known as just the Dining Hall until the 1960s when it was named after Sarah McBryde who served as school dietitian from 1919-1945 and became McBryde Hall. It served as the primary cafeteria until sometime in the 1960s after Thomson Cafeteria was built. McBryde Hall is now used for special occasions, such as award ceremonies, faculty/staff functions, and can be rented for weddings and other functions by outside parties.

This photograph is of two students eating lunch in the McBryde Dining Hall in 1960.