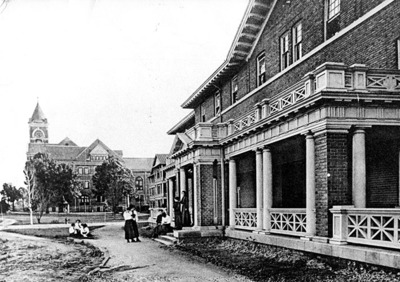 In 1909, construction on Bancroft Hall was completed. Originally called Johnson Hall, Bancroft acquired its name in 1920 when the theatre building assumed the Johnson name. Bancroft Hall was built as a third dormitory and during WWII was as a location to house young men in the Army Air Corps civilian pilot training program. At "Fort Bancroft" the cadets received pre-flight and flight school preparation as well as participated in activities on campus. Later Bancroft Hall would used to house offices and classrooms.

This photograph is of Johnson Hall in the foreground looking south with Margaret Nance Hall and Tillman Administration Building in the background around 1912.