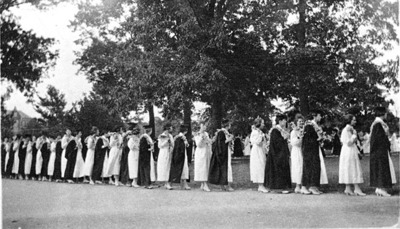 In 1903, the Daisy Chain tradition was started. The Daisy Chain was a ceremony that was a part of Winthrop University commencement exercises from 1903 to 1961. The tradition began under the direction of President David Bancroft Johnson after he saw similar processions at some northeastern institutions he visited. The elaborate ceremony helped publicize Winthrop by attracting legislators and taxpayers to campus. Originally, the ceremony took place by the fountain on the front campus following commencement, but as Winthrop grew in numbers the ceremony was changed to the day before commencement and moved to the athletic field behind Crawford Building.

This photograph is of the Daisy Chain ceremony in 1919.