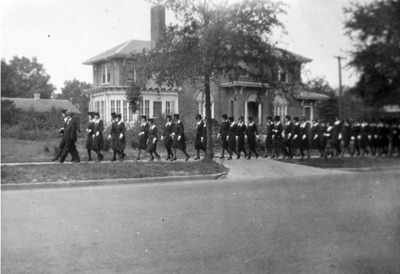 In 1895, Winthrop began it's Blue Line tradition. Originally the women were led in two lines down Oakland Avenue where they could attend any one of the many churches along the street. The procession of students dressed in blue and white uniforms was led by the president on the first Sunday of the academic year, and eventually became known as the “Blue Line.” When the uniform policy ended, the tradition lost its identity, but in 1983 President Lader revived the Blue Line. Today, the president leads the Convocation procession out of Byrnes Auditorium to the front lawn of Tillman Hall where Convocation participants, wearing Winthrop t-shirts, convene for a community picnic.

This photograph is of the Blue Line being led by President David Bancroft Johnson down Oakland Avenue in 1926.