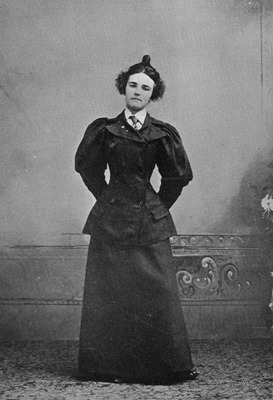 In 1895, Winthrop's uniform dress code begins. Prior to coming to Rock Hill, SC Winthrop did not have a dress code. The uniform policy began as an effort to make students equals, with no regard to socio-economic class. Students whose wardrobe deviated from the uniform in any way were brought before the Uniform Council. While the styles transformed dramatically throughout the years, navy blue and white remained a tradition. When discussion began about the possibility of Winthrop becoming a co-educational institution, the tradition of uniforms was abolished in the spring of 1955. However, discussion about coeducation continued until Winthrop became fully co-educational in 1974.

This image is of Fall and Winter Fatigue Uniform for the 1896-1897 academic year.