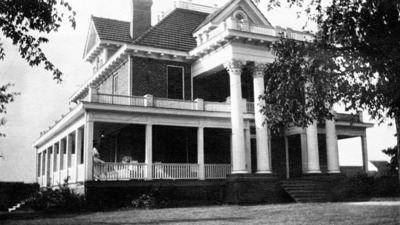 In 1894, construction on the Stewart House was completed. W. H. Stewart, a prosperous farmer from Fort Mill and member of the State House of Representatives from 1886-1890, moved to Rock Hill in 1888 and built the first Victorian townhouse in “Oakland” in 1891, which he donated three years later to Winthrop for the president’s residence. Stewart had some expertise as a builder, and took over as construction superintendent in 1895 to supervise the convicts completing Main Building (Tillman Administration Building). At the same time he began construction of his second home on the corner of Oakland Avenue and Eden Terrace. Stewart occupied the house until his death in 1912, when the acre lot and house were sold to Winthrop for $10,000. The house then became the Practice Home for Winthrop students to learn Home Management.

This photograph is of the Stewart House from the late 1910s.