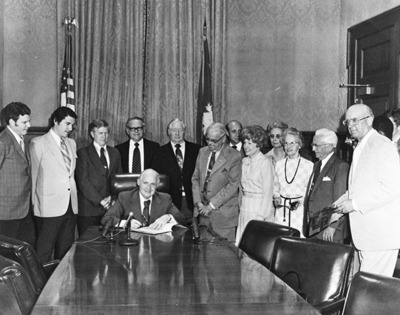 In 1974, Winthrop becomes fully coeducational when South Carolina Governor John C. West signs a bill declaring Winthrop open to male students in 1974. Men had been allowed to take Summer and evening courses since as early as 1898, but Winthrop's charter forbade men from receiving a degree from Winthrop until the coeducation bill was passed changing the charter.

This photograph is of Governor John C. West signing Winthrop Coeducation Bill in 1974.