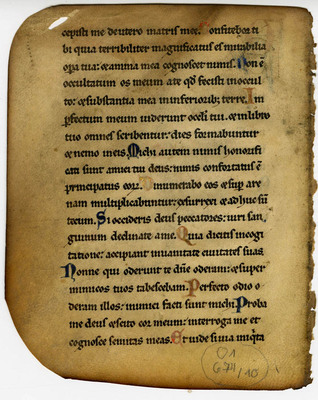 Monastic Psalter. Single folio on vellum. France, ca. 1220: approx. 144 x 127 mm (written area approx. 130 x 80 mm). Single column, 19 lines. Sotheby’s dated this manuscript to the third quarter of the thirteenth century (see below), but the decoration belongs to an earlier generation, and it is written above top line, making it pre-1240. Decoration: a two-line initial in gold—now worn right down to the brightly colored gesso—on red and blue ground infilled with white penwork decoration. Versal initials alternate in gold and blue. Foliated “86” in modern pencil. Contents: Psalm 138. Condition and Provenance: this book seems to have been in a fire at some point, for scorched corners and edges of the slightly browned leaves have flaked away, leaving irregularly shaped folios. Some of these folios have been inscribed with signatures of the sixteenth-century owner François de Marcambie, according to Sothey’s possibly a descendant of Francois de la Haye, seigneur de Marcambie (Nôtre Dame de Venilly, Basse-Normandie: the charming château still stands). This François offered a reward of wine should the book, if lost, be returned to him (126r). The name of a second owner, B. Goussil, is also recorded. The volume came into the possession of Count Eric von Rosen (1879-1948) of Rockelstad Castle, Sweden (now a conference center), and was sold in 1969 and 1980, eventually acquired by Canadian banker Joseph Pope, owner of the Bergendal Collection. Purchased by a German dealer (Sotheby’s 5 July 2011 lot 55), it was subsequently cut up and dispersed.

A psalter is a volume containing the Book of Psalms from the Bible often containing other devotional material.