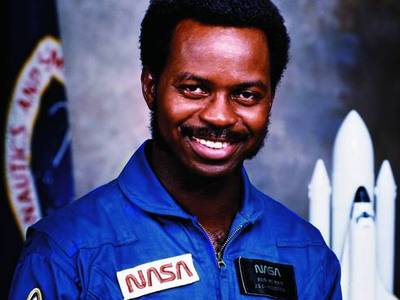 Ronald Erwin McNair was born in Lake City, South Carolina on October 21, 1950. His father, Carl McNair, was an automobile body repairman. His mother, Pearl McNair, was a high school teacher. His family was impoverished, and the house he grew up in had no running water or electricity. Despite the disadvantages of his childhood, McNair was always eager to learn. He was named valedictorian of his Caver High School Class and was awarded a scholarship to North Carolina Agricultural and Technical State University (NC A&T).

While working on his laser research at MIT, McNair’s dissertation data was stolen, leaving him with nothing. Instead of giving up, once again McNair rose to the challenge, and remarkably was able to recover two years worth of research in only four months. McNair finished his dissertation successfully, and graduated with honors from MIT.

After graduation, McNair became a scientist at Hughes Research Laboratories in California. While working there, he applied to the National Aeronautics and Space Administration (NASA). In 1980, McNair was accepted into a NASA training program and began working at the Shuttle Avionics Integration Laboratory. In 1984, McNair went on his first of three flights to space, aboard the Challenger. He was the second African American astronaut. He is responsible for many notable accomplishments including launching a $75 million communications satellite into space. Tragically, while the Challenger launched for its fourth flight, the unthinkable happened. On January 28, 1986 the shuttle, carrying six ethnically diverse crew members and the first private citizen to enter space, exploded minutes after launching. Sadly, McNair and all seven passengers were killed by the explosion.

McNair received many awards and honors in his lifetime. He was presented with an honorary doctorate of Laws from NC A&T State University in 1978, an honorary doctorate of Science from Morris College in 1980, and an honorary doctorate of Science from the University of South Carolina in 1984. McNair was also named Distinguished National Scientist by the National Society of Black Professional Engineers in 1979, and received the Friend of Freedom Award in 1981. In addition to his academic achievements, McNair was an athlete and a musician. McNair thought it was important to make time for things he was passionate about. He held a fifth degree black belt in karate, and even while he was in college practiced 6 hours every week. He was also an accomplished saxophone player and jazz enthusiast.

Above all, McNair was a devoted family man to his wife and two children.

After his death, members of Congress created the Ronald E. McNair Post-Baccalaureate Achievement Program. This program is designed to prepare and encourage low income, first generation, and underrepresented students to participate and succeed in a graduate program of study leading to a doctoral degree. In his lifetime, McNair conquered racial barriers and financial hardships. This program is dedicated to helping students uphold Ronald E. McNair’s high standard of achievement in the face of adversity.